Intimate Apparel: Behind the Scenes 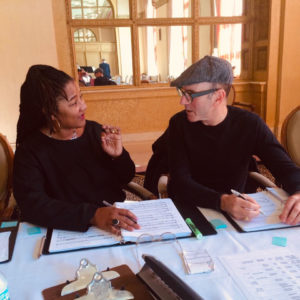 Go behind the scenes of a new chamber opera based on Lynn Nottage’s popular play Intimate Apparel, with music by Ricky Ian Gordon and a libretto by the playwright, and directed by Bartlett Sher. Set in turn-of-the-century New York, the opera tells the story of Esther, a lonely, single African-American woman who makes her living sewing beautiful corsets and ladies’ undergarments. Seeking love and romance, Esther embarks on a letter-writing relationship with a mysterious suitor laboring on the Panama Canal, and realizes that only her self-reliance and certainty of her own worth will see her through life’s challenges. Dramaturg and Director of the Opera Commissioning Program at The Metropolitan Opera Paul Cremo moderates a discussion with Gordon, Nottage, and Sher and cast members perform highlights, ahead of the opera’s opening performance on February 27.

Intimate Apparel is the first opera produced by Lincoln Center Theater and was developed by LCT and the Metropolitan Opera as part of the Met/LCT New Works Program, which is dedicated to developing new opera and music theater works.