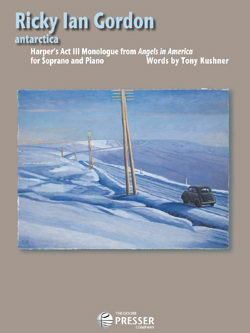 Notes: Gordon, much taken with Tony Kushner’s Pulitzer Prize winning play, Angels in America, chose a monologue as the basis for his Night Flight to San Francisco (111-40236, $9.95), which he wrote for lyric soprano Renée Fleming. He returns with a monologue from earlier in the play to create Antarctica, a hopeful, more optimistic text, to bookend with the later, final monologue. Also written for Fleming, Antarctica is another beautiful, melodic aria that fans of Gordon’s vocal music will enjoy. For advanced performers. Dur.: 5′ “If the music of Ricky Ian Gordon had to be defined by a single quality, it would be the bursting effervescence infusing songs that blithely blur the lines between art song and the high-end Broadway music of Leonard Bernstein and Stephen Sondheim…It’s caviar for a world gorging on pizza.” — The New York Times